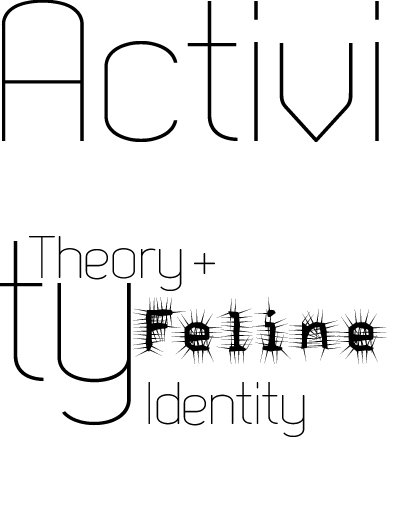 Since learning about Activity Theory, I’ve fallen prone to the Baader-Meinhof Phenomenon (frequency illusion) and I’m seeing traces of AT everywhere.

When we adopted two abandoned kittens last spring, we named them Calliope and Cane. They were black, five weeks old and virtually identical. We named the vocal girl after the instrument, and the purring boy after the Hurricanes hockey team. We soon learned that Cane was the vocal one, and Calliope the purr factory. And that Cane was a girl. This last one prompted us to try to rename Cane to a more girly sounding name (Candy Cane? Sugar Cane? Kay?), but the damage had been done and we couldn’t shake the name or the male pronouns we used with her.

After a silly mispronunciation one day, we started calling Calliope ‘Callio-pie’ (like the dessert), then ‘pie-pie,’ or just ‘pie’. Similarly, it happened through some garbled language that Cane became dubbed ‘nu-nu’ or ‘nu.’ Now we simply call them π (pi) and ν (nu).

Is it Activity Theory?

With the kitties, our past experiences and motives (must name pets), perceptions (gender, sensory input), and reasoning (something to tell them apart) shaped the initial objects (names). Names became re-shaped by new knowledge (oops, not a boy), circumstantial use (misspoken language) and knowledge from other domains (Greek alphabet).

Through use, the kitty names changed, but still refer to the same things, and are used for the same purpose. Our interactions with the objects remain the same, as do the forms. So what changed?

Incidentally, when we use Cane’s new nickname, Nu, we no longer think her as a boy and we automatically use the correct pronouns for her. Something about the modified object affected our interaction. Could it be AT in action?