Nothing like a transformative experience on a Wednesday morning, am I right?

Let me set the stage. On October 29, Linda Nochlin passed away. In 1971 Linda wrote an essay called, “Why Have There Been No Great Women Artists?” This essay was met with mixed reviews but it’s still considered to be one of the very first major works of feminist art history (Morgan, Purje).

Coming from an art history background, I remember Nochlin’s essay. But it’s also been nearly a decade since I took a look at it. And, over the past decade I’ve become a much different person with much different beliefs, values, and perspectives. The news of Nochlin’s death came in email form and prompted me to reacquaint myself. “Bree in 2017”, a student, academic, and woman, had a profoundly different reaction to Nochlin’s essay than Bree in 2008.

Do yourself a favor and check out this illustrated guide to her famous essay.

Some Things:
-The fundamental point here is that WHY IN THE WORLD is it our immediate reaction to answer Nochlin’s question with a list of “great” female artists? (At least that was mine, “Wait, what about Lee Krasner?”) Doesn’t that make the point? If there were great female artists, the question wouldn’t be asked and you wouldn’t have to remind anyone of them. I’m not saying there are NOT. But, we would all be lying to ourselves if we tried to say “masters” and “geniuses” of great art include women.

-Nochlin argues that the problem lies in education and institutionalism. This is brilliant. It addresses the WHY. WHY is this question asked, rather than glossing over it to try and prove a point. There is a long history of the relationship between women and art. That history tells the story in relation to Nochlin’s question.

-Doesn’t this apply to every group that faces oppression of some kind? Couldn’t I ask, “Why Have There Been No Great Black Artists?” The natural reply is to start rattling off a list of amazing black artists; “Hey, what about Robert S. Duncanson?”. And you’re right. But, the question isn’t who are the great black artists but why are they not part of the history?

Does this make sense?

Well, so there you go. Food for thought. And a Beyonce reference for fun cultural context. 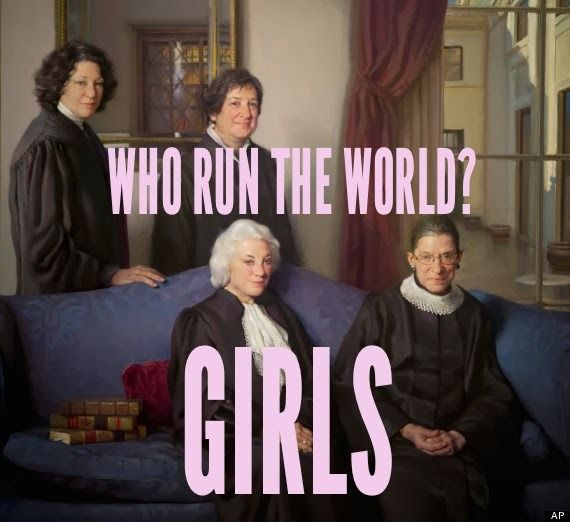