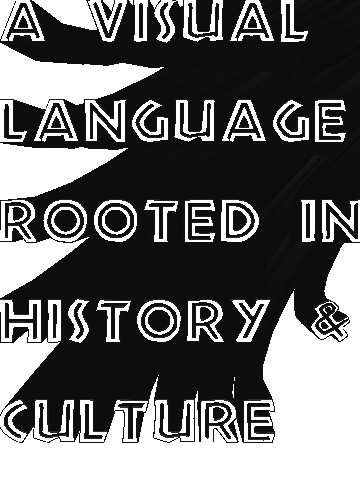 During my undergraduate studies at Elizabeth City State University, I often found myself using independent study opportunities to create a visual design that would help give voice to the continent of Afrika. Not once did I consider the possibility of allowing Afrika to give voice to my design practices. I knew, being born in Liberia, that Afrika truly has a rich culture and tradition rooted in dance and music. I, like many designers from the Afrika, had however never associated our beloved homeland with typography, graphic design, or any other visual language system of her own. This all changed during my second semester in the NC State Masters of Graphic Design program.

Prior to the commencement of this semester, I came across a lecture by Saki Mafundikwa on TEDTalk titled “Ingenuity and elegance in ancient African alphabets.” In his lecture, Saki discusses the foundation of ZIVA, Zimbabwe’s first graphic design institute and his aspiration to help create “a visual language for Afrika rooted in Afrikan heritage” (Mafundikwa).  As I stared at the monitor screen taking notes as Saki spoke, I couldn’t be still, it was as if I had stumbled across a pot of gold. “Typography exist in Afrika?” I inquired of myself. I Immediately began researching “Typography in Africa” in hopes of finding additional resources on this topic.

My research led me to yet another work by Saki, a publication titled “Afrikan Alphabets: The Story of Writing in Afrika.” The publication is a result of over 20 years of research by the author on Afrika’s visual language system. I was pleased to know, when I came across an article written by Piers Carey, that Saki is only one of many advocates championing a movement to create an visual identity for Afrika rooted in her history and culture. Piers Carey is Head of the Department of Visual Communication Design at the Durban University of Technology in South Africa. I got in contact with Mr. Carey after reading his MIT Journal publication for assistance with additional resources as I pursue my newly found interest in Afrikan Typographic System and Visual Languages.

I am still in the infant stages of my research, but Afrika has already begun giving voice to my design practices. Below are two spreads from a catalog I designed based on principles of the modern grid structure and typographic system. The catalog design was a Typography class assignment in which I worked within the specifications of the project brief while allowing the history of Afrika’s visual language to give voice to the modern book.