Recently, I’ve been researching control and disorder in the design process. This was prompted by a comment Denise made during my last project presentation concerning multiple representations of public spaces and monuments. “Design often attempts to contain… but people don’t always live that way,” or something to that effect (feel free to correct me!). Moving forward, I kept with themes from my previous project and incorporated new ideas from the critique to revise my research provocation: How can graphic designers better allow for ongoing community participation in the designed work/system? Does continuous participation entail relinquishing the designer’s drive to order and contain?

The system/s I’m proposing introduces participatory interaction with the aesthetic presentation of certain designed objects so that any consumer, user or patron could alter the visual appearance of the object. These changes would be reflected across all instances of the object in the world, not just for the individual who made the changes. Others would experience these changes by looking through an augmented reality lens. 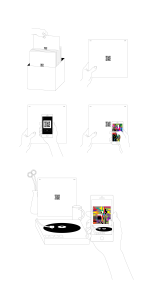 The application of such a system isn’t difficult to imagine in fine arts or music. An ongoing participatory model might allow for things like a “malleable” record cover, where patrons are able to access and alter the appearance of album imagery so that it changes continuously over time. This could be applied to the music as well; artists would create compositional systems with certain editable components that would be manipulated by the listener. In essence, you’d have a slightly unique performance of the piece with each listen (see Eno’s Bloom, Scape or Trope).

Where the ongoing participatory model becomes trickier is in the design process where a designer’s role is traditionally one of visual authority (Cué, 2014), the final aesthetic voice in the signal chain before an artifact is released to the world. While contextualized research helps the designer place aesthetic choices in a pragmatic framing, they remain the collector, the synthesizer and mediator for a community of voices. There is immense power in this role. The designer exerts their power (for good or bad) through control of the artifact and its presentation.

Of course, this is an oversimplification of a complex arrangement. To say that designers contain and control things because they’re visual authoritarians seems unfair and untrue. Boundaries and structure are necessary tools in communication and can provide resistive forces to rebel against and challenge a designer’s creativity (Ind & Watt, 2005). That said, bestowing control of an object’s appearance to the public seems like a recipe for visual anarchy. Moreover, a lack of boundaries and motivation for engaging in this chaotic discourse almost voids the model’s intent: to encourage vernacular approaches to image-making (visual languages) to emerge from the communities that engage with certain designed objects.

As problematic as this might be, there are at least two nuggets of value when looking at the potential chaos of a completely open aesthetic system controlled by anyone and everyone: (1) seeing a designed artifact develop in unpredictable ways and (2) removing the “self” from the design process. Creating and maintaining a coherent and functional system and utilizing the potential benefits from a chaotic model are both essential components in making ongoing community participation a useful reality. The trick is figuring out how to balance these components so that the whole thing doesn’t fall apart.