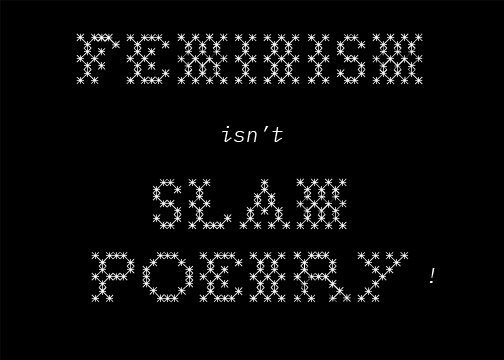 Caroline Sinders’ work, “Feminist Data Set,” aims to collect various forms of written feminist collateral and is inclusive of things like poetry, books, and transcripts. By design, however, it is not inclusive of data that doesn’t meet specifications of a particular sect of feminism known as “Intersectional Feminism,” which goes beyond women to include other marginalized groups, like the trans and non-binary community. But, in drawing this line, a striking question was raised in my mind: Is there a “right” way to be a feminist? Many well-known works by first and second-wave feminists address a myriad of issues faced by women alone and were the foundational ideas for the gender revolution we’ve witnessed in the last decade. But were they wrong in their failure to consider intersectionality? The culture we exist in today tends to push people to the outer margins of belief systems, radicalizing ideas, for better or for worse (in the case of feminism, undoubtedly for the better.) But is this at the expense of those who fall somewhere in between? What happens to our idea of inclusivity if we think about belief systems more like a spectrum? Does the all or nothing attitude make the barrier of entry too high for people who are questioning their own ideas? To exclude those who haven’t ‘gone far enough’ is to disregard the notion that people need to maneuver between spaces and stages of belief in order to form opinions. It seems to me that it has become simultaneously difficult to change our own minds and to accept those who haven’t yet changed theirs. Feminism isn’t slam poetry. It’s a question raised in our minds, a challenge to our circumstances, and an invitation to consider new ideas.